Last week, we visited the New York Historical Society to view the remodeled Tiffany Lamp Gallery. The gallery showcases 100 Tiffany lamps from the collection of Dr. Egon Neustadt which are now once again on permanent display in the newly designed two story setting. 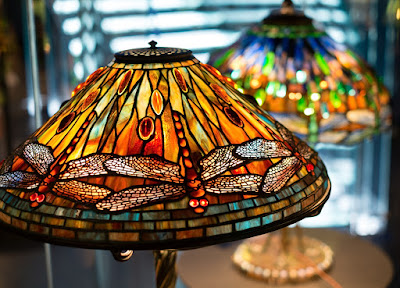 Dr. Egon Neustadt and his wife purchased their first Tiffany lamp in1935 at a second hand shop in Greenwich Village for $12.50. This Daffodil lamp ignited a passion for collecting that would span five decades. Their collection eventually included over 300 examples of Tiffany lamps, as well as windows, sheet glass, and other decorative works by the studio. Hildegard Neustadt died in 1961 and Dr. Neustadt continued to expand the collection until his death in 1986.

The Neustadts acquired as many Tiffany lamps as possible, often purchasing multiple examples of shades of the same pattern, but in different color combinations. The couple collected at a time when there was no internet and no reference books to acquire information about Tiffany Studios, relying on dealers and their own expertise to guide them. In 1970 Dr. Neustadt published The Lamps of Tiffany which cataloged the collection. Even though the book has only ever had two printings, it is still considered an essential volume on Tiffany lamps due to the depth of the collection and the information provided on each piece. 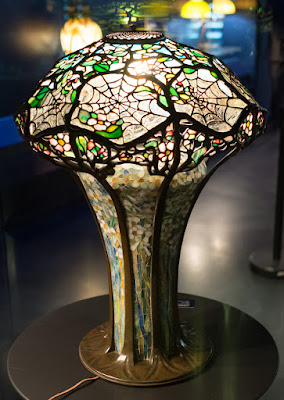 In 1983, Dr. Neustadt displayed a significant portion of his Tiffany collection in an exhibition at the New York Historical Society. He was so delighted with the installation that he donated all the works on display to the NYHS shortly before his death. We toured the exhibition in the late 80’s and were blown away by the quality and variety of the lamps on display. One of the unusual  features of that exhibition was that many of the 28″ chandelier cones were displayed upside down on the ceiling, which made viewing the pieces difficult. 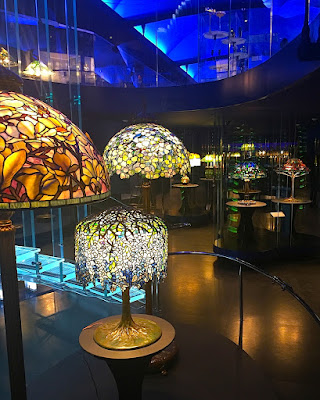 The newly redesigned gallery displays over 100 lamps, as well as windows, blown glass, mosaics, and pottery by Tiffany Studios. The two story space allows for close inspection of the each lamp, and many of the lamps on the first floor can be viewed from the second floor, giving the viewer a unique perspective to see the lamps. Studying the lamps from above is much easier than trying to view them upside down on the ceiling! 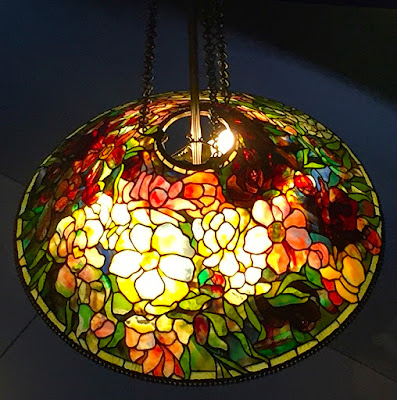 For more information on the New York Historical Society and the Neustadt collection, visit www.nyhsitory.org 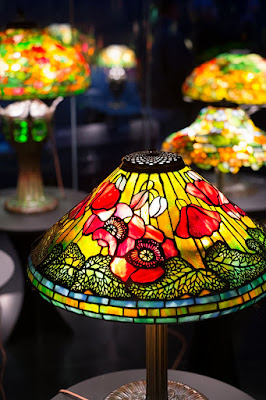 Photos for this post by Bill Campbell and M. Brian Hartz Photography