After completing the pattern work for the shade and pictorial mosaic for the base, we were able to begin construction on the 20″ Cobweb shade. Studying original Tiffany Studios examples in books, on line, and in person, we came to realize that there were two basic color schemes used in the eight or nine examples that exist. The first style is to use a completely transparent, textured clear crackle glass for the background. The Cobweb Mosaic lamp was originally conceived as an oil lamp, so the transparent glass made sense. With the widespread advent of electricity, the clear crackle glass was too transparent, and other examples of this lamp were created using glass that, while still transparent, has the addition of filamented color in the webs. After discussion with our client, we decided upon a semi-transparent glass for the shade that would have lots of sparkle and color, but not be completely clear. 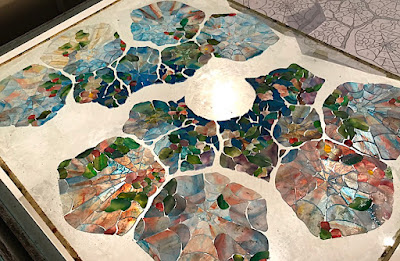 For the webs, we primarily used a glass that was created by the Uroborus Glass Foundry as “cobweb glass”. The glass starts with a slightly milky clear base to which are added hints of light blue and fuchsia pink. The addition of strands of clear streamer add another layer of diffusion without making the glass opaque. This, in conjunction with other glasses, gave us the effect we were after. Bill transitioned the background/web color to a vibrant cerulean blue at the top of the shade for added impact.

Once the glass was cut and fit to the pattern, the pieces were foiled by hand and then transferred onto the waxed form. 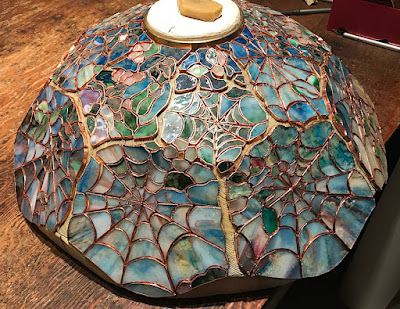 This design has a complex series of metal tree branches that extend up into the shade, between which the spider’s webs are strung. The gaps in the pattern allow for the branches to be incorporated into the design. 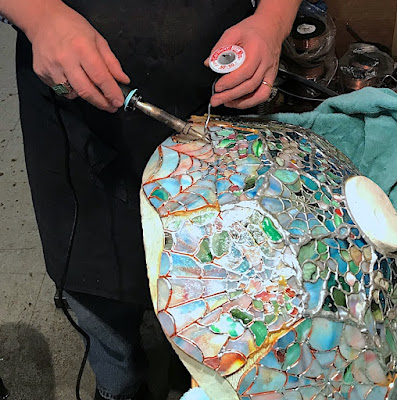 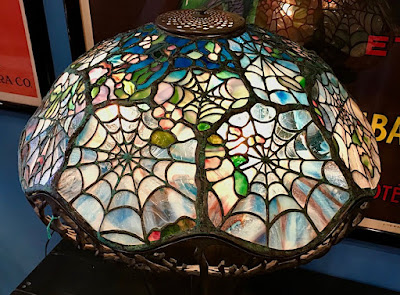 Next week: Finishing the base and completing the lamp.