While on a visit to Schlitz Studios to buy glass in the late 1980’s, we noticed a large bronze casting and faceted lamp form for the 20″ Cobweb Mosaic lamp sitting on a table in a corner of the studio. When questioned about the base, Jim Schlitz would only offer that it was not for sale. 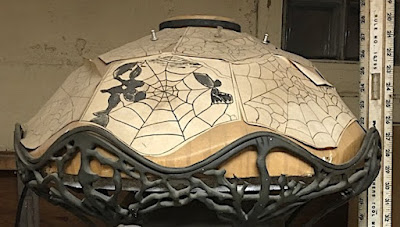 The 20″ Cobweb Mosaic lamp is one of Tiffany Studios most elaborate lamps, and it is a piece we have long wanted to recreate. Over the years we would occasionally speculate about the casting we saw, wondering if the lamp was ever completed. A year ago, we received a call from a client who purchased the casting and lamp form from Schlitz Studios when the company went out of business in the mid-90’s. He was looking to have the lamp finally completed. This began a year long adventure to transform the basic materials into a completed lamp. This lamp has many unique challenges, so we devised a step by step method of construction, deciding in what order the various elements needed to be addressed.

The first step necessary to work on the lamp was to use the old masking tape covered Styrofoam shade form to create a new form. Once we had the form, Bill began the pattern work for the shade. Tiffany Studios created fewer than ten examples of this lamp, and each example differs from its predecessor in size, shape and pattern. These were truly created one at a time. 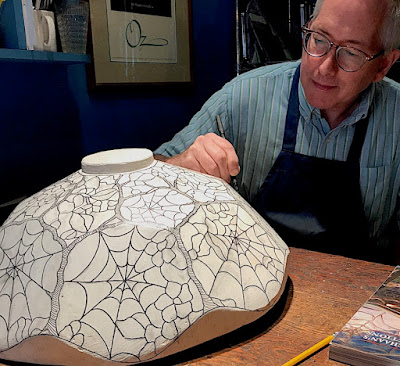 Studying photographs of original examples as well as viewing an original Cobweb Mosaic lamp at the New York Historical Society, Bill recreated the complex series of branches, spider webs, and apple blossom leaves and flowers on the shade. 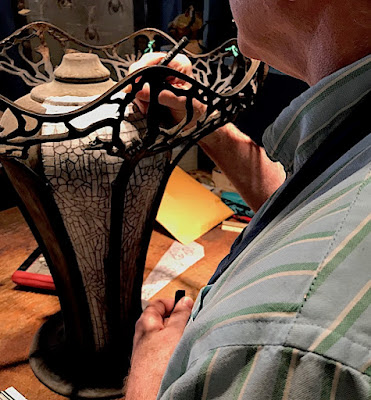 The next step was to create the patterns for the elaborate glass mosaic on the base. After working out all the details, the patterns were copied flat so glass cutting could begin. 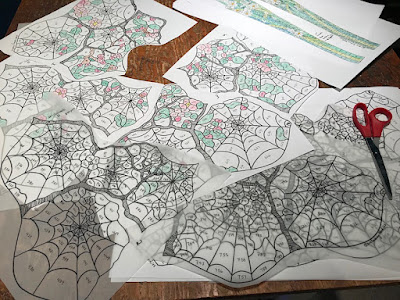 Next week: Creating the shade.