Tiffany Studios produced many window and lamp designs featuring Peony flowers. The large, showy blooms come in a variety of colors ranging from white, pink, deep fuchsia, and vivid red. There are even varieties that produce yellow, peach, and blue flowers. In China, the peony was the national flower until 1929 and came to represent nobility, honor and wealth. Other mythologies include the flower being a symbol of the moon, bashfulness, and medicinal healing. 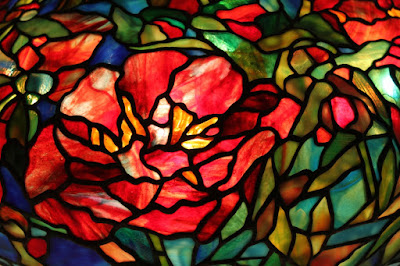 The 22″ Elaborate Peony shade is one of Tiffany Studios’ masterpiece designs. The intricate blending of leaf and flower provide endless fascination and inspiration to the glass artist. This pattern is often referred to as the Windswept Peony because of its delicate piecework. 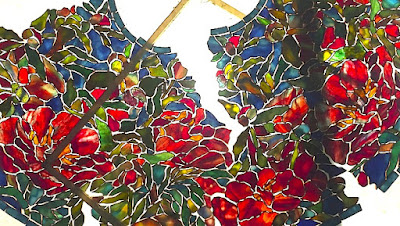 This shade was commissioned by a client in New York who requested a bold color palette with vibrant blues and reds. Bill Campbell did the glass selection which includes ring mottled, streaky, ripple, and fracture/streamer glasses, all skillfully blended together to create the shade. Glasses from every manufacturer harmoniously coexist, each bringing a different point of interest to the finished composition. The completed layout is shown on the light table in the photo above. 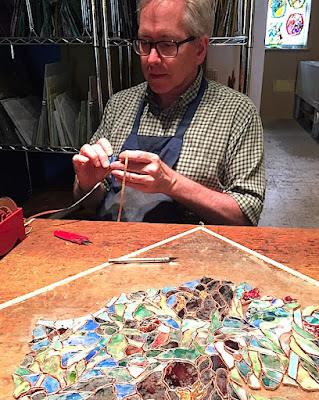 Both Bill and Irwin Terry worked to complete the shade once the layout was completed. Bill is shown foiling each individual piece of glass by hand, a painstaking and time consuming task that requires attention to detail and a deft hand. Since foiling is a visual task, we often listen to audio books while completing this task. 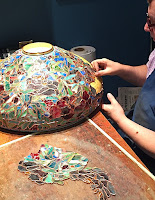 Irwin is seen transferring the foiled pieces of glass onto the lamp form. The individual pieces are held in place with our special house-made tacky beeswax. 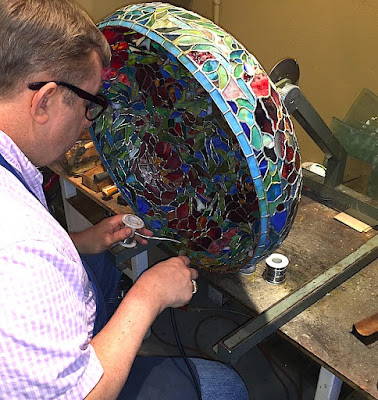 Once the exterior of the shade has been soldered, the wax is melted and the shade is removed so the interior can be soldered. All large shades like this one are given several copper reinforcement wires which are soldered in place along the leadlines on the interior of the shade. These wires provide the invisible strength that will keep the shade in tact for the next hundred years. Once the soldering is complete, the shade is copper plated and a verdigris patina turns the silver colored lead lines a rich red/brown/green that matches the patina on the lamp base.

The completed shade was mated with the large Library base.