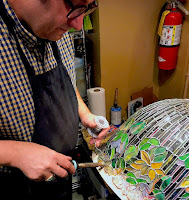 After transferring and positioning the foiled pieces onto the waxed lamp form, Irwin began soldering the 18″ Flowering Lotus shade. While Irwin soldered the shade, Bill began selecting glass for another lamp commission

When soldering a shade the molten solder runs downhill, so positioning the shade at the correct angle is critical to getting a nice beaded lead line. Our custom made lamp holder allows Irwin to adjust the position of the shade easily. Depending on the size of the shade and the angle required, soldering is done both sitting down or standing up. 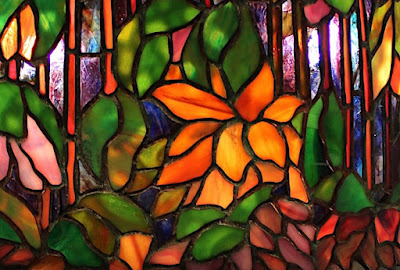 With the soldering complete, the shade is cleaned and the lead lines are given an authentic Tiffany Studios verdigris patina. As mentioned in the previous post, the color inspiration for this lamp was a pond at twilight. The rich blue/purple/clear fracture glass used for the water was created by the Schlitz Glass Foundry in the late 1980’s/early 90’s. Skillful color blending was required to enhance the feel of early evening, and deep saturated colors were chosen for the flowers and leaves. Heavily mottled deep greens are enlivened by blended tones of orange, deep yellow, and purple/pink in the flowers. 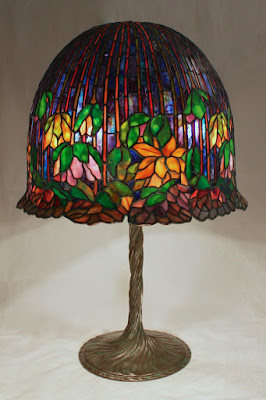 The finished shade is shown on the Twisted Vine base. This piece was commissioned by a client in North Carolina, and is now in their collection.

After completing the Lotus lamp, we got a jump start on three lamp projects that will be completed in the new year. There will be lots of foiling and soldering to get through in January.

Century Studios is closed until